Becky drew connections between algorithms, surveillance, social movements and political outcomes. We had an interesting discussion over the AI-driven phrenology and what to do to escape the traps of facial recognition. 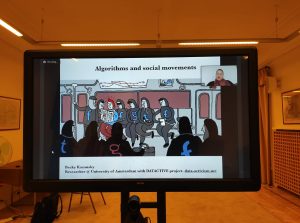 The afternoon session was already in our traditionally break out groups, where facilitators had the chance to recon their own experiences of how algorithms, surveillance, and social movements work in different countries, and discuss their political consequences, especially in the context of resilience.

The participants well engaged in their groups during the discussion of the influence of bots and trolls and the impact of disinformation on both daily and political life. Much was revealed about the political use of data where certain groups hold the power to manipulate information and change the public’s behaviour. Great examples were provided by participants related to leakage of data based on different countries.

Special attention was paid to surveillance and the attempt to censor content in certain countries in order to control the public mood. And of course authoritarian interference was discussed and how to resist them with our actions. 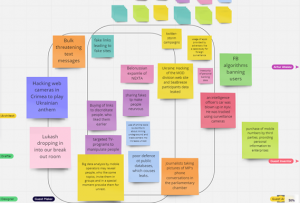 All these have been drawn and done in our online interactive Miro board and we do hope that with this tool the participants were able to both work within the groups and have a better picture of how the other groups were elaborating their ideas.

Our first week is behind us! But we still have three more intense days left after two days off to recharge!

Have a great weekend.